LET US HELP YOU PLAN YOUR TRIP.
YOU'RE JUST A CLICK AWAY

Parque Nacional Tortuguero is aptly named for the area that boasts one of the largest Green Sea Turtle nesting grounds in the world. If you are looking for a memorable lifetime experience, you can witness the Baula (Leatherback Turtles), Carey (Hawksbill Turtles) and the Verde (Green Sea Turtles) who come to the shores of Tortuguero beaches to lay their eggs. Another special treat is when the baby sea turtles hatch out and instinctively run their tiny little bodies to the sea under the cover of night. A very special experience in Costa Rica that should not be missed.

Tortuguero is not all about the sea turtles, wildlife in general is abundant thanks to both the natural protection of Tortuguero's ecosystem and the government protection of the National Park. The Tortuguero canals themselves are home to caimans, crocodiles, fresh water turtles, several species of fish and even manatees. On the canal banks, you can spot 3 different species of monkeys, sloth, reptiles such as Costa Rica’s famous poisonous frogs, Basilisks (Jesus Lizards), and maybe even the elusive Tapir. Bird lovers don’t forget your binoculars, you can find well over 300 species of birds in Tortuguero National Park.

Although you can get a taste of Tortuguero Canals on a One Day Tour, we recommend you immersing yourself for a 2-3 day adventure in Tortuguero National Park for the best experience. Our multi-day Tortuguero excursions depart from San Jose, Arenal, and Puerto Viejo and provide transportation to your next destination. This makes our Tortuguero tours one of the best deals in Costa Rica! 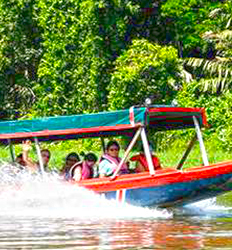 Looking for a hassle free way to travel from La Fortuna to Tortuguero National Park? Book one of our Tortuguero Shuttles! Daily departures from San Jose, Puerto Viejo and La Fortuna at 6am, and from Tortuguero at 12 pm. Shuttles include transportation to most hotels in Tortuguero on the main canal and even a stop for breakfast on the way!

Tortuguero Shuttle deposit is $10 per person one way.
(The balance of $48.00 per person must be paid 72 hours prior to the day of the tour)

Exact departure time will be provided on your e-ticket upon confirmation. 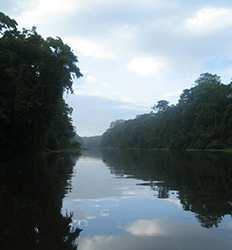 If you really want to immerse yourself in nature, the mecca of Costa Rica’s nature tour destinations is the Tortuguero Canals. With so much wildlife and turtles nesting or hatching only at night, a day trip is just not sufficient. An overnight trip includes lodging, meals, guided tours of the Tortuguero canals, and best of all transportation from Puerto Viejo to La Fortuna or San Jose after the excursion. One of the best eco tours in Puerto Viejo is also one of the best deals in Tortuguero too!

Supplement Charge for single occupacion for both standard and economic package : $15USD per night 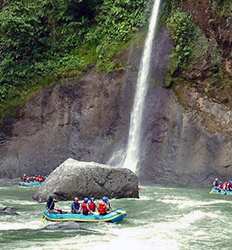 (Smart Connection - Connects San Jose, Arenal & Puerto Viejo)
Experience the very best that the Pacuare River has to offer on land and water while immersing yourself in the beautiful Costa Rican culture! Our Pacuare River Rafting, Hike, & Indigienous Visit is an incredible 3 day tour that you will never forget. So why hesitate? Book your Discount Rafting Pacuare, Hike & Indigenous Visit 3 Day now! 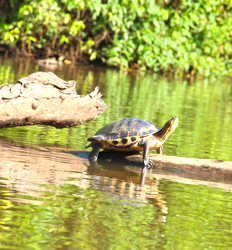 One of the tour packages in Costa Rica. This package combines our 2 bestselling adventures in Costa Rica; white water rafting Pacuare River and 2 nights in the remote canals of Tortuguero. Best of all it connects Arenal to San Jose or Puerto Viejo too!

Supplement Charge for single occupacion for both standard and economic package : $15USD per night

Further instructions and pick up time will accompany your e-ticket.