LET US HELP YOU PLAN YOUR TRIP.
YOU'RE JUST A CLICK AWAY


At The Real Deal Tours we have every possible Arenal Nature and Eco tour in the Northern Arenal region that you can imagine. Many of Costa Rica’s tourists are drawn here because of the towering Arenal volcano whose summit reaches over 5,400 feet and is still very active! It doesn’t matter where you are in this region, you’ll have a perfect view of the majestic Arenal volcano. If you’re an avid hiker, you can hike near the summit and get the most spectacular panoramic view of the entire region. With such a diverse population of wildlife you can help but become a spectator to the various animals you will come across including monkeys, sloths and tropical birds.

However, you didn’t come to Costa Rica just to watch the volcano Arenal right? Aside from the Arenal volcano, there are spectacular waterfalls in La Fortuna, crystalline blue rivers hidden in the rainforest, bat caves to explore, and so much more!!

Lake Arenal and the many rivers are another major attraction for the Northern Arenal region. The Real Deal Tours also offers various Arenal Nature and Eco tours that include floating or paddling down beautiful rivers on your own kayak, canoe, or even a pontoon. A definite must when visiting Costa Rica!

With so many Arenal Nature and Eco tours to choose from, you may have to make a second trip to Costa Rica! 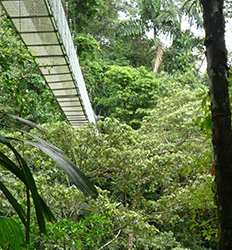 Did you know that 90% of all the organisms in Costa Rica’s rainforests and cloud forests are found atop the gigantic trees? Back in the day, biologists would use ropes and pulleys to climb up to the canopy of these trees. Some trees so tall it was almost impossible to explore! 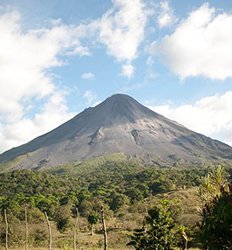 Have you ever hiked along antique lava flows and volcanic rock? If you love nature and appreciate the history and wildlife that help define Costa Rica´s pura vida, then the Arenal Volcano Tour is certainly for you! Take a step back in history to 1968 when the Arenal Volcano first exploded and destroyed the town of Tabacón.

This tour is "National Park Only", for more options see details. 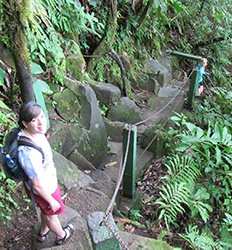 La Fortuna waterfall is approximately 75 meters high and plunges into an emerald green watering hole. Located only 6 km from the town of La Fortuna at the base of the Arenal volcano, our naturalist guides will lead you through the dense tropical rain-forest pointing out monkeys, sloths, and a variety of other wildlife in their natural habitat. 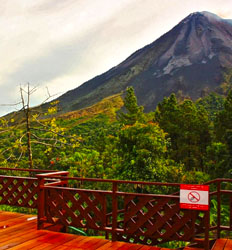 Arenal Observatory Volcano Tour Tour deposit is $15.00 per person.
(The balance of $25.00 per person must be paid in cash the day of the tour) 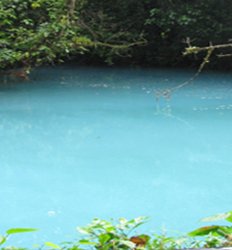 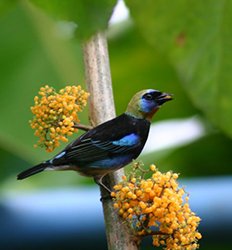 We’re all about birds! Come explore both morning and evening with this twice-daily bird watching tour near Arenal Volcano! Whether you are new to birding or more experienced with this fun hobby, there is something for every birdwatcher when you’re bird watching with us! 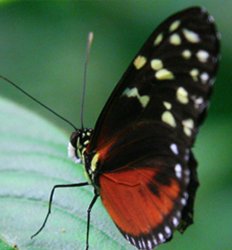 Whether you want an activity the whole family can do together, or just want to experience these beautiful creatures up close for yourself, a tour of the butterfly garden at Danaus Eco-Center is a great choice! Our expert naturalist guides will ensure you get the most out of your eco tour experience. 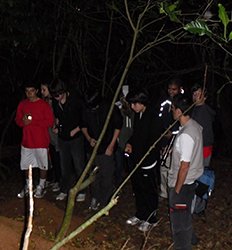 Ever wonder how the forest changes when dusk sets in? Check out our Night Jungle Walk tour and experience it for yourself! When the sun goes down, the forest comes alive! Our well experienced expert guides will point out all the things our un-trained eyes might miss in the darkness as we wind our way through the Ecocentro Danaus. 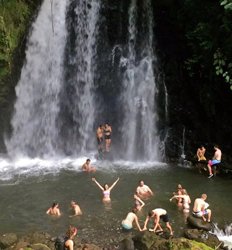 Are you ready for the most authentic & extreme Costa Rica hike? How would you like to swim in the crater lake of Cerro Chato, cross hanging bridges, visit a waterfall, explore the Arenal Volcano Observatory, enjoy a therapeutic facial and finish the day with a cocktail while you reward yourself in the Arenal hot springs?

Hike Chato & Arenal: Two Volcano Extreme Hike deposit is $19.00 per person.
(The balance of $50.00 per person in cash must be paid the day of the tour) 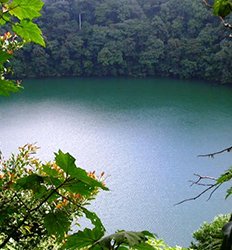 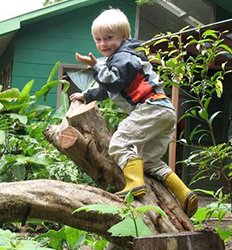 If you're traveling Costa Rica with children in tow, the Children's Rainforest Tour is for you! Treat your budding adventurer to an all-day trip through the primary rain forest, and watch them come alive with excitement as they discover many species of animals and many different types of birds along the way. 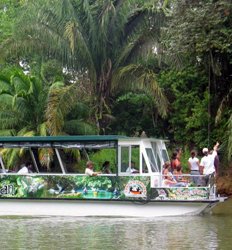 Understanding that not all travelers to Costa Rica are interested in extreme adventures, The Real Deal Tours offers an ideal tour for you and your family to enjoy. The Pontoon Caño Negro tour allows you to take in all the wonderful sights and get up close to the wildlife in a leisurely way with a visit to the Caño Negro Wildlife Refuge. 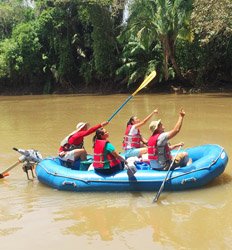 Always striving for ways to combine eco-friendly technology with ecotourism in Costa Rica, we have a new eco-tour option that is great for all ages. Combining our comfortable rafts with the modern technology, our Eco Safari is the best way to connect with wildlife on the Rio Frio and the surrounding the Caño Negro Wildlife Refuge. 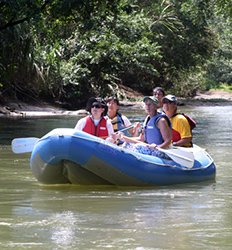 There are several boat tours in Arenal that are fun for the whole family. This Arenal rafting safari on the Penas Blancas River is perfect for the more adventurous families with children as young as 3 years old! Gently paddle down the river while your naturalist guide points out wildlife such as monkeys, sloths, crocodiles and more!

The rainforest is a completely different place when the sun goes down, and now you can see it for yourself! Join the night shift: bats, caimans, monkeys, birds and so much more get this evening party started as you float your way right through the center of it all. 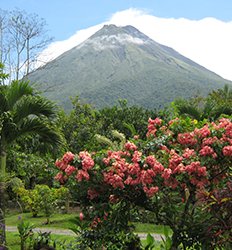 An all in one adventure; The Real Deal Tours´ Arenal Super Combo including the Hanging Bridges, Waterfall and Arenal Volcano hike will by far become one of your best experiences in Costa Rica! You´ll hike approximately 1.5 miles to reach the hanging bridges of Arenal which are strategically and securely placed among the towering trees. 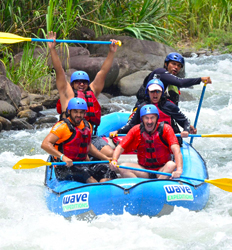 On this trip we go high and then we go low! See the jungle from two very different vantage points in one super fun day you won’t want to miss! Walk along the very same hanging bridges that scientists use to get in touch with the wildlife. Then, fly down the Balsa River on a wet and wild rapids adventure!

Balsa River Rafting + Arenal Hanging Bridges Combo Tour Tour deposit is $25.00 per person.
(The balance of $85.00 per person must be paid in cash the day of the tour) 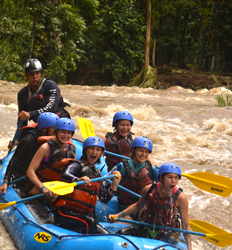 Rafting Balsa River class II-II rapids are not for the faint of heart! Add in a lovely horseback ride in the rainforest, and a hike to one of Costa Rica’s most beautiful waterfalls and you have one heck of a Costa Rica eco adventure!

Balsa River Paddle, Arenal Saddle & La Fortuna Waterfall Hike Tour deposit is $25.00 per person.
(The balance of $98.00 per person must be paid in cash the day of the tour)